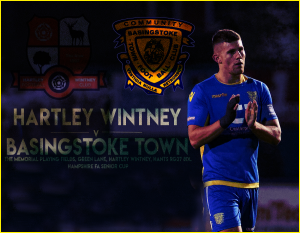 Following our shocking performance last Tuesday at the Camrose, and having an idle Saturday due to the weather, we have had 7 days to get our squad fit as we return to Cup action as we travel to Hartley Wintney in the Hampshire Snr Cup.

In the league Hartley Wintney now sit seven places above us in 11th spot, but failed to win back-to-back wins after losing 1-2 at home to Chesham United.

In the Hampshire Cup, like us they got a bye in the first round and then they travelled to Winchester City in the second round. After the game finished 0-0, the game went to penalties and after 7 successful penalties by Hartley, Winchester City’s Oli Bailey had his shot saved and sent Hartley through 7-6 on penalties.

As stated last week, their squad contains two ex-Stoke players, Nathan Smart & Rowan Vine and yes you they can say the same about our squad containing ex-Hartley players.

Their leading goal-scorers in the league are Nic Ciardini & Michael Campbell with 4 a piece and their version of a penalty specialist in midfielder Tyron Smith with 3 successful spot kicks.

Last week, ex-Stokie Nathan Smart played centre-back and to be honest was not under that much pressure for a lot of the game as Stoke simply failed to put the ball into the box on a number of occasions.

Well Martin Kuhl was thwarted by the weather in his first expected match in charge as the King Langley pitch failed an early morning pitch inspection.

Therefore, it turns into a more important first match as we travel to Hartley Wintney in the second of a number of possible games over the next 6 weeks.

It will be interesting to see what Kuhl will do with a squad that must be low in confidence for this match. I would expect the players to be up for this game and I am hoping Sam Smart has returned to Stoke without any injuries, as we will need him to do the job that we failed to achieve last week. That was simply putting a decent cross into the 6yd area!

Defensively we looked wide open again and have now not kept a clean sheet since the 3-0 win at Staines back on the 20th October 2018.

In midfield, will Collier be back alongside Kennedy for this game and if so who will drop out in his place.

What Martin has in mind with that will go along way in seeing if we have any chance of getting back on track. Keeping us in the cup will be a start and a win will hopefully give us a boost in getting a push up the league where we belong.

With Mitchell Parker no longer at the club and Callum Bunting having just returned to training, it leaves the forwards Argent, Wright and Smart to do the job in front of goal.

Again, it is time for our players to stand-up and put in a performance worthy of themselves and our club.

Match-Day Admission Prices for league games are as follows, but not sure about Hampshire Cup Matches – Adults £10, Concessions £7 65+, Under 18’s & students. Under 16’s £2